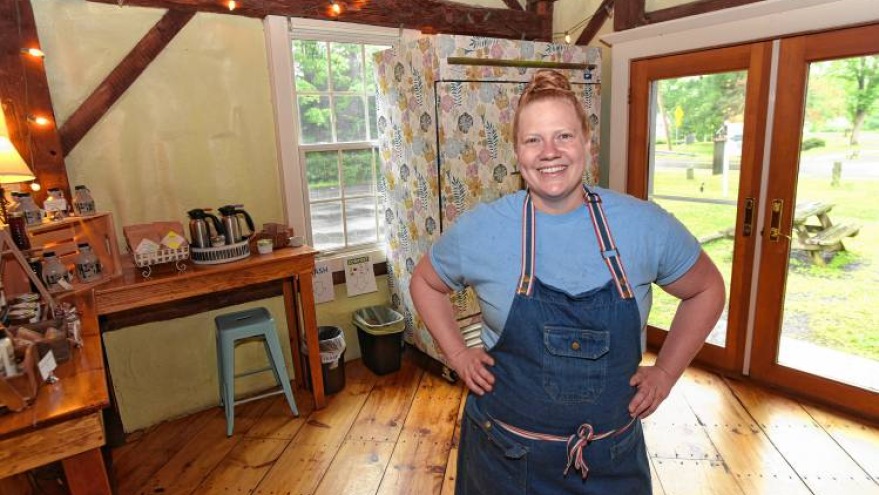 To read the full article from the Greenfield Recorder, click here: Recorder.com

But then, with her first five classes under her belt in February 2020, the COVID-19 pandemic arrived, bringing her plans to an abrupt halt.

Now, two years later, Damkoehler is planning a 275-square-foot expansion onto the north side of her 7 South St. building to accommodate the goals she had to put on hold. She is seeking the community’s help to raise a $20,000 match for a Massachusetts Growth Capital Corporation grant, and has launched a Patronicity crowdfunding campaign that runs through July 25.

Damkoehler, a Bernardston native who was recently listed as part of BusinessWest’s 2022 Class of 40 Under Forty, has been working in the culinary field for more than 20 years. She left Franklin County after high school to attend the New England Culinary Institute in Montpelier, Vermont, and spent much of her career in Seattle, where she made a name for herself working with various catering companies. She also had a part-time job teaching cooking classes.

So, when she returned to Bernardston in late 2018 to open Sweet Lucy’s Bakeshop, formerly operated as the 7 South Bakery by Mike and Kay Dougherty, the community’s desire for similar classes was evident.

New classes, she said, would also build off of her time spent teaching her employees.

“It’s really part of the job I’ve embraced as a chef,” Damkoehler said in an interview regarding passing on her knowledge in the kitchen to others.

Damkoehler said she plans to teach “everything” in her courses. In addition to mainstays such as pies and French macarons, she wants to teach her students how to make the most savory meals possible.

Classes will be held in the 275-square-foot expansion, which Damkoehler also plans to use for events such as children’s camps, birthday parties, dinner parties and corporate team building events. The expanded building is expected to be functional in early 2023.

In addition, talented connections of Damkoehler, many of whom also own their own restaurants, will occasionally come in to teach guest classes. These include one of her colleagues from Seattle, who plans to come to Bernardston to teach a pasta-making class next year. Sweet Lucy’s Bakeshop also plans to partner with World Eye Bookshop in Greenfield for a “Work the Book” program, in which guests will bake recipes featured in books sold by the bookstore.

“I am so excited about the opportunity to start teaching our community how to bake and cook and make healthy meals,” she said in the video.

Learn more about the Biz-M-Power Grant