We had the thoughts and had the plans, now how can we get the money for it? It was awesome that MGCC was there with this [program].

Jeremy Lockett and his family are introducing their culture and delicious cuisine through Himalayan Kitchen, a Nepalese and Indian restaurant in the heart of Union Square in Somerville, MA. Jeremy, his wife, Rabina, and her brother, Uttam’s shared qualities of discipline and passion for the food business has helped them grow a loving customer base in the city. While the family-owned restaurant opened in 2016, it took Jeremy about a year and a half to fully develop the Nepalese portion of the menu, as it was important to set it apart from other Indian restaurants in the area through their traditional offerings.

“No matter the weather, we were always there, being just a five-minute walk away from the restaurant.” Jeremy shared that Himalayan Kitchen’s first $1,000 day was after a huge snowstorm, which motivated them to spend all day finalizing menu items and working hard for the business from the indoors. “It kept growing from there. It was such an ease of tension to know people were liking the food and coming back for it,” Jeremy said.

Himalayan Kitchen may be serving their flavorful foods out of to-go containers, but their desire is to create a space where customers dine in and enjoy the full experience. “My hope is that we have more customers and make an atmosphere where people stick around and eat and drink longer than they are now,” Jeremy said. He obtained a liquor license in hopes of renovating the bar area and purchasing necessary equipment for it. “We had the thoughts and had the plans; now how can we get the money for it? It was awesome that MGCC was there with this [program].” 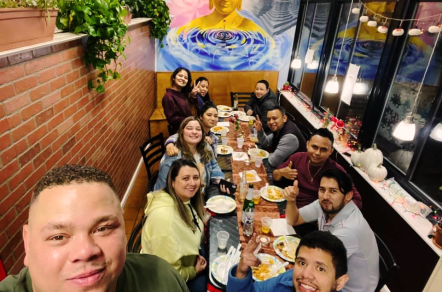 With Biz-M-Power Crowdfunding-Matching Grant Program, Himalayan Kitchen was not only able to reach their goal of $11,675 with two days left on their campaign and thus, receive a 1-1 matching grant from MGCC, but exceed it by an additional $241, brought in by a total of 134 patrons. The grant was used for equipment, including sinks and an ice machine, and building shelving units for the soon to be renovated bar area.

Jeremy discovered the Biz-M-Power through Union Square Main Streets, “without them, we may not have heard about it. Mike came into the restaurant and was hands-on with us. I was singing and dancing every day!” Jeremy shared. His SBTA Provider, Lindsay Allen from East Somerville Main Streets, also helped him succeed in the application and implementation process. Jeremy’s Patronicity coach, Camryn Greer, was another helping hand that made the crowdfunding experience a positive one! “She made it effortless. Whatever I needed she was there for me and took care of it. With the help of her and the main streets, the process was made easy for us. We didn’t have to figure out much on our own.”

Jeremy’s love for speaking with everyone who walked in Himalayan Kitchen’s doors helped the customers truly get to know his heart behind the business. Among the other helping hands was a friendly neighbor who emailed around 70 personal contacts and other business owners she knew from being a property owner and businesswoman herself. “I didn’t think we were going to reach our goal, but I stuck with it. I spoke with every customer, whether I knew them or not, and anyone that would listen. I let them know we were fundraising and if they wanted to support a small family business, how they could get on board.”

“I would definitely recommend Biz-M-Power for other business owners,” Jeremy stated, and encourages business owners to reach out and connect with community members in gaining support! “No one is going to sell what you’re selling better than you.”